How CBD Brings Homeostasis to the Human Body

Unlike other natural remedies that seem to be hit or miss, there’s more to CBD than folklore.

It all boils down to something inside each of us, something well-researched and proven by science: the endocannabinoid system.

The endocannabinoid system is the reason a plant or plant-based compound is able to cure debilitating diseases, relieve side effects, and so much more. That’s right, our bodies contain cannabinoid receptors designed to allow cannabinoids to improve our health and wellbeing.

Read on to learn how keeping your endocannabinoid system in balance will help to improve your quality of life.

Wait. What? Do our bodies have a system that is activated by compounds found in cannabis plants?

Don’t take our word for it or mark it up as hippy lore; there’s science to back it all up. It all starts with the body’s continuous search for homeostasis (balance!).

We do yoga, strive for healthy diets, and focus on our well-being — both mental and physical — for a reason: we desire balance.

There’s also a reason that we feel “off” when we’re sick or anything in our bodies is out of normal range: our physical system craves balance for optimal functioning, just like we do in our daily routines and lifestyles.

For our bodies, this is referred to as homeostasis.

The term “homeostasis” was coined in the 1930s by American scientist Walter Cannon. Cannon studied how and why the human body is able to maintain a given temperature, often without external intervention. (1)

It comes from Greek terms meaning “same” and “steady.” It refers to specific processes shared by all living things — plants and animals alike — which create the internal conditions necessary for optimal function and survival.

When a body has achieved a sense of homeostasis, each part is working together — from elements in the blood to multiple organ systems, and beyond. When just one thing — a hormone for example — is too high or too low, the results can be catastrophic; a small change (think of the butterfly effect) can affect the entire body negatively. Without homeostasis, we are simply unable to function at our highest, most optimal level.

As it turns out, this idea of homeostasis doesn’t have to be left to chance. There’s a system that’s recognized by researchers and medical professionals alike that helps our bodies achieve homeostasis: the endocannabinoid system.

What Is The Endocannabinoid System? 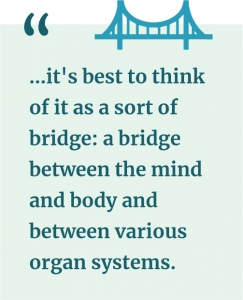 To fully understand the endocannabinoid system, it’s best to think of it as a sort of bridge: a bridge between the mind and body and between various organ systems. It is incredibly important in the body’s ongoing, constant hunt for homeostasis that we just explored.

In a very basic sense, the endocannabinoid system is comprised of three core components:

endocannabinoids (both naturally produced and found in specific foods and compounds), nervous system receptors that both endocannabinoids and cannabinoids are able to bond with, and specific enzymes that the body uses to break down these compounds for optimal functioning. The term itself comes from the word “endogenous” which refers to anything that is produced naturally in the body, and “cannabinoid, which is any compound specifically found in the cannabis plant. The endogenous cannabinoid, as the basis for the system’s name, illustrates the bridge between cannabis-based compounds and natural compounds within the body that work together to help the body achieve a full, true sense of health.

The existence of this system makes medical marijuana and CBD research make sense. It takes away the “hype” and the claims that seem too good to be true: they seem that way because they are. Our bodies are designed to use compounds found in cannabis plants for our good.

What Does The Endocannabinoid System Regulate?

With this basic understanding of the critical bridge between our health and cannabinoids — like CBD — we are able to better understand what the endocannabinoid system is capable of regulating.

First, it’s important to explain and understand what the components of the system itself are able to accomplish and why.

Today, we are familiar with two individual receptors that are activated by cannabinoids, though research is ongoing as to whether or not there may be more:

Before jumping to the conclusion that this makes the system limited somehow, it’s important to point out that the central and peripheral nervous systems are as important to our bodies as a motherboard is to a computer.

These two systems are responsible for almost all of our body’s functioning and reactions. They influence our motor functions, control how we feel pain, keep our digestive systems working, control our immune responses, moderate our moods, enable (or disable) our ability to sleep, help us remember information and so much more.

This vast array of functions helps illustrate why cannabis and its compounds — like CBD — are able to influence so many daily functions and alleviate so many common — sometimes debilitating — disorders and side effects.

It gets even better.

Endocannabinoid receptors are smart: they are able to act only on the bodily functions that are “off” or out of balance in order to achieve a precision level of homeostasis. The receptors cannot over function to negatively affect one system while attempting to bring balance to another. They work where and when they need to without going “overboard.”

This level of precision coupled with so many positive benefits is truly amazing. “Wow” is not an undeserved reaction when you put it all into perspective. (3)

Cannabinoid receptors play a major role in the operating of the endocannabinoid system within each of us. There are two main receptors, classified as “G protein-coupled receptors” if you think back to high-school biology classes. These are the CB(1) and CB(2) receptors we mentioned previously. While others may be involved, these are the two that researchers have identified to date.

Because these receptors react to cannabinoids, by triggering the production of specific enzymes that break down cannabinoids and distribute them throughout the body (this is called endocannabinoid signaling), many modern drugs are actually designed to mimic the effects of actual cannabinoids; each of these acts as a synthetic cannabinoid.

The CB(1) and CB(2) receptors serve critical roles within the body. Sometimes, however, fatty acid amide hydrolase — an enzyme — binds to each receptor type, breaking them down, and limiting the effectiveness of the receptors.

When this happens, either CBD or Delta-9-tetrahydrocannabinol (THC) can be utilized to break down the fatty acids amide hydrolase, increasing the overall functioning of the endocannabinoid system. Often, CBD is preferred due to its lack of the traditional effects of cannabis.

Research is still ongoing, but, many professionals believe that an individual suffering from a clinical endocannabinoid deficiency — lacking enough of one receptor type or another, or suffering from too much fatty acids amide hydrolase — may be more prone to certain conditions like fibromyalgia, gastrointestinal tract disorders, chronic pain, migraines, depression, anxiety, irritable bowel syndrome and more.

When you consider this, it’s logical that supplementing natural endocannabinoids within the body with something like CBD may help regulate the endocannabinoid system, alleviating symptoms that modern medicine often falls short of. Its therapeutic potential is great!

The Endocannabinoid And Immune Systems

A weak immune system can be catastrophic. Many of the most prevalent conditions in the world today are actually classified as autoimmune disorders: lupus, fibromyalgia, endometriosis, multiple sclerosis and more.

It’s thought that the enzymes controlled by the endocannabinoid system actually modulate the activities of immune cells. Because many immune cells originate in the central nervous system — where, as we mentioned earlier, most endocannabinoid receptors also live — the receptor’s release of enzymes plays a direct role in human homeostasis, especially relating to the immune system.

Initial research demonstrates the endocannabinoid system’s ability to prevent overactivity in the immune system, which often causes an immune response, mainly inflammation. This inflammation disrupts homeostasis and can cause pain, chemical imbalances, neuro-responses and more.

Therefore, the endocannabinoid system — and adequate intake of cannabinoids, like CBD — could prevent catastrophic immune system responses and failures.

How It All Works: CBD And The Endocannabinoid System

We’ve covered homeostasis and its critical role in optimal functioning. We understand the components of the endocannabinoid system and what it’s capable of affecting within our bodies. Now, let’s put it all together.

In the simplest possible explanation, our body is filled with endocannabinoids (which we can gain more of through our diet, antioxidants, omega fats and more) and receptors within our nervous systems that are waiting to be activated by cannabinoids like CBD.

While these receptors are activated by other external and internal processes in an effort to constantly bring a sense of balance to our body, they are also activated by cannabinoids. When something is out of balance or functioning at a suboptimal level, the cannabinoid receptors are able to identify the source of the problem and release enzymes that can help restore balance.

When we ingest or apply cannabinoids — like CBD — in the right amounts, we can help activate our endocannabinoid systems ourselves instead of leaving the quest for homeostasis to chance. We can help our bodies achieve balance without the side effects of traditional treatments and medications — It doesn’t get much better than that.

In short: the body’s endocannabinoid system is absolutely essential for optimal functioning and balance. It’s the link that is traditionally missing between the miraculous claims of cannabis and its properties and the actual results. It’s proven by science, it’s inside all of us, and while it sounds too good to be true, it is far from it.

The endocannabinoid system is the reason CBD is effective and why its benefits are far from hype. It is truly incredible!

Want to balance your endocannabinoid system?
Read: How to Take CBD Oil